It’s clearly a city-folk reaction to activities such as camping, rock climbing and horseback riding, but De Oaks felt that it was a frontal assault on Montana’s reputation. A screenshot of his initial post on the BDC page is below.

Before I responded to him, I clicked on the link to his Facebook profile, which was mostly private. However, on his “About” tab, one of the websites listed for him is:Â http://www.pawsup.com. A Google search for his name turns up a more specific connection. De Oaks is the managing director of The Resort at Paws Up, at least according to his LinkedIn profile.

When I noted to him via Facebook that we wouldn’t be getting involved in his company’s dispute with WGN over coverage of his resort, he called it an “attack by a news organization against the state of MT.”

So a businessman felt snubbed because of an anchorwoman’s mild distaste for non-urban outdoor activities. I informed him we’d not be getting involved and left it at that.

However, NBC Montana didn’t leave it at that.

No, in an example of unsourced, un-bylined, click-bait journalism at its finest, KTVM posted a skeletal story about the “incident” with the non-news headline “Chicago anchor doesn’t appear to be a fan of MT” andÂ replete with a big Montana state flag image and “UGH” in all-caps with an exclamation point. There is no mention of the clear source of the story, De Oaks, who posted the same news tip to KTVM’s Facebook pageÂ as he did to our page. He seems to have gotten a moreÂ more receptive response:

There were some fun new developments in this case of click-baiting this morning. NBC Montana Today posted this message to its Facebook page: 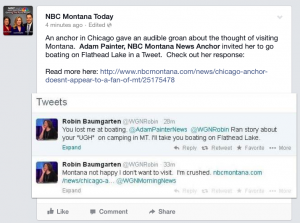 Here are the relevant tweets embedded, starting with Painter’s post at 5:41 this morning:

@WGNRobin Ran story about your audible "UGH" from Monday interview segment about camping in MT. I'll take you boating on #FlatheadLake!

You lost me at boating. @AdamPainterNews @WGNRobin Ran story about your "UGH" on camping in MT. I'll take you boating on Flathead Lake.

I suppose I could take this as a journalism lesson. If my story isn’t generating enough buzz, try contacting the sources you didn’t contact before you wrote the story and then ask them to react publicly to the story you already wrote about them. For bonus points, make sure to involve yourself personally somehow, like by inviting said source to an activity you already know they’ll reject.