In this morning’s Game Day section, the Chronicle’s new sports writer, Kyle Sample, went and did some unpopular things. 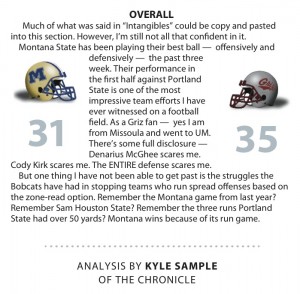 Not only did Sample pick the Grizzlies to win today’s ’Cat-Griz matchup but he also identified himself as a Griz fan.

Given the always-heated nature of the ’Cat-Griz rivalry, these two things were sure to rankle more than a few readers in the community.

Lo and behold, the Chronicle’s social media pages lit up with unsolicited postings from angry readers eager to see Sample run out of town on a rail.

The Twitter backlash that I was able to find was somewhat less severe than the Facebook flogging — and less visible, given the more dispersed nature of Twitter. Still, it’s there if you go looking for it. Here’s the Storified edition of the few tweets I found.

Surprisingly, the comments on Facebook, where everybody knows your name, proved the more hostile. It started out this morning with reader Camille Lindsay, who wrote:

The Chronicle has a griz write the cat-griz game analysis, who picks griz to win, Kyle Sample. Kyle, you really used the UM in DUMB this time. You’re a professional writer but you can’t form a sentence. I hope your prediction is wrong and they fire you.

I’m not sure what Ms. Lindsay is talking about with the “can’t form a sentence” jibe. I just reread Sample’s prediction and found lots of English sentences there. But whatever.

Kyle alot people are mad at you for picking the griz over the cats what’s your reasons their worst season in over 25 year and one of the cats best. Why?

Wondering why a Griz fan is doing the Bobcat Football reporting? If he stays, I am done with the Chronicle.

That particular posting received eight comments as of this writing including this from Ryan Witt:

I’m going to interject here as well to note that recently departed sportswriter Colter Nuanez was a UM grad whose brother played on the Grizzlies. And Nuanez’s predecessor, Will Holden, was a Missoula native. When Holden left, the faithful were sure they had just lost the best sports writer in the country and decried Nuanez as a Griz spy. Now, Nuanez is remembered as the golden child Bobcat beat writer, and Sample is the subject of ridicule.

Witt chimed in with a thread of his own as well:

I never liked the BDC, and today just shows a good reason why. Seriously? You picked your own town to lose in one of the biggest rivalries? What’s wrong with you people?!

To which Bret Conti replied:

That’s why we call it the Bozeman Daily Comical.

I can assure you, Bret, that is not the only reason people call us the “Comical.”

And finally, in response to our status update marking the end of the game and the Bobcat victory, we have this from Mike Jerrett:

Kyle sample, sorry that is probably a hard pill to swallow. I hope you will at least make a statement regarding your griz bias in previous articles. Reality tells me that you should report facts not your opinion

And this from Colt Browning:

Is it hypocritical to congratulate the team you chose to lose?

And then there’s my favorite: this gem from Jim R. Harris, which got nine likes:

Your sports column “writer” in today’s paper wrote that the Bobcats would lose today…would love to see him tarred and feathered tomorrow in front of the R Bar!!!

The note beneath says the posting was “edited” by Harris. I’m guessing it was to correct the spelling of either “tarred” or “feathered.” It certainly wasn’t edited to diminish its hostility.

I thought that would be the end, and then this popped up as I was writing this, from Taylor Jackson:

Glad BDC predictions for today’s game of an MSU loss did not come true. Let’s see some hometown support next time!

All that said, I want to address a few things here.

To Ms. Linday and Mr. Jarrett: You don’t fire people for doing their jobs well. You fire them for other reasons, as we know all too well.

Sample predicted the game’s outcome as his pre-game analysis dictated. Mr. Jarrett, you ask Sample to address his “griz bias.” He did in that disclosure statement you’re upset about.

Professional journalists are people too, sir. They have biases and opinions. But they also have that word “professional” before their job titles, which means they put away their personal beliefs and write the stories as factually and fairly as possible given the information available.

I challenge you to show me where Sample has done otherwise.

That leads me to Mr. Jackson’s and Mr. Witt’s remarks about “hometown support,” which I’ll just answer with the same question I used to answer Jackson on Facebook:

While you’re asking the newspaper for “hometown support,” ask yourself this: Would you rather have a sports writer make the call his analysis of the pre-game factors leads to or have him blindly predict a hometown win to make people happy?

I know which option I’d pick, but then again, I’m biased.

Finally, to you, Mr. Harris.

I know that Will Holden’s column in the ’Cat-Griz magazine noted that there was plenty of hatred involved in the historic cross-state rivalry, but that is no justification for calls for mob violence against a person.

To hell with that. You posted it with your real name attached. It wasn’t funny. It isn’t funny.

Being a sports fan, you must know that good sports writing often involves vivid imagery. Here’s some for you, Mr. Harris:

In a typical tar-and-feathers attack, the mob’s victim was stripped to his waist. Hot tar was either poured or painted onto the person while he was immobilized. Then the victim either had feathers thrown on him or was rolled around on a pile of feathers so they stuck to the tar. Often the victim was then paraded around town on a cart or wooden rail. The aim was to inflict enough pain and humiliation on a person to make him either conform his behavior to the mob’s demands or be driven from town. The practice was never an official punishment in the United States, but rather a form of vigilante attack.

And that’s all I’ve got to say about that.

I did find some reason and optimism online tonight. Ironically, one of the faithful on the Bobcat Nation forums put it best. Here’s user MSU01:

Everyone is entitled to his/her own opinions and I would be pretty pissed if the Bobcat writer picked MSU every single game just to make the fans happy. As the MSU football program has improved over the course of the past decade, I have found it increasingly funny on this site how we here (myself included at times) are the harshest critics and loudest doom predictors about MSU – just read the game thread of any MSU road game this year – but don’t handle it too well when anyone perceived to be from the “outside” picks against MSU. Colter would have been absolutely destroyed on this board last year had he correctly predicted a Griz win. I wish Kyle the best even though I’ll probably never read much of his work due to the Chronicle’s decision to charge for its online content.

For the record, in the 2011 Game Day section, sports writer Colter Nuanez predicted a 24–20 Bobcat victory. Nuanez called the teams “evenly matched across the board” and awarded the advantage to MSU because it was a home game for the Bobcats and because of quarterback Denarius McGhee. The close game Nuanez predicted didn’t manifest itself, as the Griz ran roughshod over the Bobcats, beating the home team 36–10.

The year before, sports writer Will Holden predicted a 24–21 Bobcat victory. The game wound up to be a 21–16 win for the ’Cats in frigid, windy Washington-Grizzly Stadium.